We went to Atlanta for a Long Weekend. #BuyLocalBGTravels Choice for Fall Break.

We went to Atlanta for a Long Weekend. #BuyLocalBGTravels Choice for Fall Break.

Now, we took a trip right before school started back for city and county to the Capitol of the South, “The A,” The Empire City of the South, ATL or more appropriate Atlanta. We went when there was a ton of heat, large crowds, civil rights protests and there were zero issues getting around. Why? Because we planned properly. We stayed out by the Perimeter but most of the tourism was downtown. Here are our MUST HITS of local stuff we tried (We know there is more to explore in Atlanta and will do other posts in the future):

1. Heirloom Market- We found this on a prior trip while seeing a concert at the nearby Cobb Energy Center. This place is not where you would expect. A Korean BBQ that is at a convenience store front located at 2243 Akers Mill Rd SE. We went there for the Spicy Korean BBQ sandwich. OH MY:

2. Buford Highway Farmers Market- As you know, we’ve mentioned before, we are members of the Southern Foodways Alliance and they have discussed the culinary significance of these immigrant owned restaurants in the Buford Highway area. The Must Do for the food lover is a trip to Buford Highway Farmers Market. There were things we’ve never seen in our lives fruit, vegetable, meat and even processed food wise. This is the most amazing local market under what could have been an old box store roof. You move all throughout the world in one visit:

3. El Rey Del Taco- Since you’ll be at Buford Highway Farmers Market give El Rey Del Taco a shot. Probably one of the best places I’ve had tacos in Atlanta but I’ve been proven wrong. If you have another spot let us know. This place is surrounded by Korean joints offering Bubble Tea. Really, Buford Highway is everything that is great about America attracting cultures all over the world to live together.

4. Home grown- We’ve got a consistent must hit in Atlanta. This place is that place. We first went here about three years ago with Chef Josh and Chelsey from Home Cafe and have been addicted since. We’ve bought art, crafts and other weird things in their flea market in the back of the store with an older gentleman jamming on a xylophone and a keyboard. It really is an artsy, big city vibe with Southern offerings in food and a sticker over the register that reads “Love the South Hate The Racists.” It’s true to the Southern Heritage when it comes to from scratch goodness but it also is a mix of every imaginable person. Some people call it “Hipster.” I’d call it what the south is becoming, “welcoming.”

No suggestions for Home Grown. Get what sounds good, because it is. Nothing we’ve had has been below, “WOW!”

5. Things to do other than Eat- If you are going to be a tourist and hit World of Coke (Hate to say it but the old ads alone are worth the visit), Aquarium (Must See), College Football HOF (As a hardcore football fan we say ‘meh’), Civil Rights Museum, Zoo and/or tour of CNN to get the city pass. There are great walking/hiking trails all over the city. Great shopping all over (Try Ponce City Market). Also, October 1st Georgia Tech hosts Miami Hurricanes and Braves end their season with the Detroit Tigers at home. No kids with you? Hit Fox Theater and see Chance The Rapper or Comedian Bill Burr. Our best bet, hit the Clark Atlanta v. Morehouse Game and makes sure to watch the band: 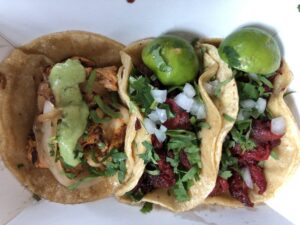